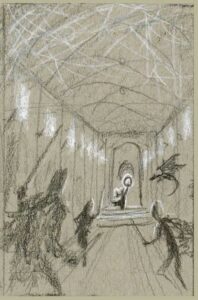 It’s hard to believe it’s July already. The team has been diligently working on every facet of building out a new fantasy IP, with everything from branding and the website to our legal stuff and even a good deal of artwork. We’re getting into the really fun parts, because, of late, we’ve been working with Melissa Gay on the covers for each of the first five books.

It was an amazing and informative process, one most of us had never been involved with before. It all started with each of the founding authors putting together art briefs of what they thought their first covers would look like. We spent hours describing characters and the scene. We found images of people, weapons, and other objects that we thought would be representative. This was all put together for Melissa’s review, so she could provide us all with several sketches that were her interpretations of what we’d written.

The founders got to get a look at the sketches Melissa did for Marie Whittaker’s first Pyranon novel Embers and Ash, as well as my first Daemanon novel Seeds of Dominion, which are both expected to publish Q4 of 2021. We were all stunned by what she did. 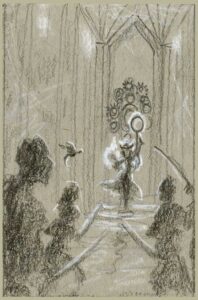 We first went over the sketches Melissa did for Marie’s Embers and Ash, the discussion was lively, but there was a pretty clear winner that we all felt was going to play well to fantasy audiences by creating a sense of mystery and magic. I have to add here that working with Melissa Gay has been a pleasure and a privilege. She has not failed to wow us at every turn.

Then it was my turn.

I must admit, when I got my first look at my sketches, I was hard-pressed to pick a favorite. Without including any spoilers, the composition of the characters and the villain in all three were exactly what I’d described to Melissa. Each was compelling, engaging, and emotive. Finally, I felt like the second one captured everything I was after, except for the positioning of the dragonette (Xilly), and that’s what I proposed to the team. 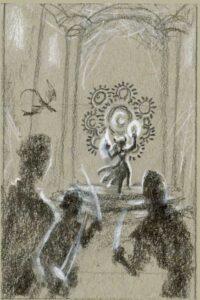 However, after some discussion, and in no small part due to Todd Fahnestock’s input, we decided to take elements of both two and three for what Melissa would undertake in the final artwork. Todd as been in the fantasy writing game much longer than I have, and he has fantastic insights into what works, what doesn’t, and what readers truly respond to.

In the end, we came to a consensus. The plan is to take the door and villain posture from number two and combine it with the closeness and detail of number three. Xilly will have a very active pose, caught mid-flight, and the villain (no spoilers) will be the centerpiece of what we believe will be a truly compelling cover for Seeds of Dominion.

I’d be lying if I didn’t say that I was chomping at the bit to see Melissa’s final, full color version. When we saw the sketches for Todd’s cover, we were all truly impressed. When I got my first look at what she’d done for the final version, I couldn’t believe what she’d done. It was fantastic and, having read Todd’s book, it truly captured both the character, magic, and even wonder of the novel I knew would live behind that cover.

So, here we are, one step closer to our launch day, and my anticipation and excitement continues to grow. It’s been a delight pouring my creativity and time into the Eldros Legacy, and I have no doubt that everyone involved feels the same.

When we go live, it’s gonna be HUGE, so stay tuned. There’s much more to come.