Part of working with a creative team is taking what others have come up with, interpreting it, and applying it to new creative endeavors. As an example (and without any context), the Delvers (dwarves), of which you will learn more later, were Mark Stalling’s brainchild. That idea was then expounded upon with Rob Howell, and from that vision, I came up with an ancient cabal within a Delver duchy in Pelinon that works behind the scenes against an even more ancient enemy. You’ll have to read my novel Seeds of Dominion to know what that’s all about.

The point is, the creatives who have been working on Eldros Legacy for about eight months now have not only put their heads together and come up with something amazing, we’ve all built one idea upon another to create something far greater than any one or even two of us could come up with on our own. The examples of this process—of building one idea on top of another—are countless, and what we’ve learned is that, when we work together, there’s lots of  brainstorming and one great idea after another. We believe it’s something you are going to think is amazing.

But it doesn’t end with just writing.

Recently, I had the distinct privilege of designing the cover artwork for what will be the first Eldros Legacy publication: Here There Be Giants. It is an introductory collection of five short stories, one each from the Founders, and includes the first chapter from Khyven the Unkillable, which will be the first Eldros Legacy novel released. We’ll be giving Here There Be Giants  away in the very near future to, well, anyone we can give it away to. We may also end up including a link to it here on the site, but that is a decision we haven’t finalized yet. Stay tuned for that, if it happens.

Before I get to far into the cover art for it, however, I need to mention that in the artwork below, you’ll see four separate components, and every aspect of those elements was a team effort in some fashion, which is sort of my point here.

There is the logo, of course, which is the culmination of Melissa Gay’s initial sketches combined with a Founder meeting to select key components, and then brought to completion by Sean Fahnestock, the brother of Founder Todd Fahnestock. The logo is a perfect example of how the whole team put their minds together to create something we think is pretty remarkable.

Melissa was also the one who created the five continent symbols you’ll be seeing on our book covers (and elsewhere) in the coming months and years ahead. Some of her work was at least partially derivative of some very rough sketches I did early on as well as the result of another Founder meeting where we brainstormed what we each wanted. Melissa’s creativity and skill gave us final artwork that we were all delighted with, I then did the colorization and texturing (where applicable), making them available to the team for use in just about any medium.

There is also the stone frame that borders the cover, and—without giving too much away—is a key component to the meta storyline as well as each of the disparate storylines that you will get to see evolve as this project unfolds over the years. The artwork was provided by Melissa Gay, and we think she did a spectacular job. There were some tweaks made to it after the fact, but she did an amazing job capturing what the five Founders had envisioned after much discussion.

Which brings me to the reason for this post. Todd was the first one to finish an Eldros Legacy novel. It’s entitled Khyven the Unkillable, and everyone on the EL team things it’s an exceptional way to kick off the first five novels that we’ll be releasing and have affectionately referred to as Phase 1 (think Marvel movies).

It was Todd’s description in his novel that gave me the inspiration for what you see below. As I read that chapter, I found myself truly visualizing the scene he was laying out for, well, all of us. I could see it in my head, and when the subject of what to put on our giveaway collection cover, I knew what I wanted to do.

I must admit, I did this sort of on my own, at first, but when I presented to the group, their response was overwhelmingly positive. I don’t know if they connected what I’d done with what Todd had written, but it is my hope that anyone who ends up reading this post and has a chance to read Todd’s book will see the clear connection.

The cover on the left below is the final version. It includes the five symbols representing the five continents of our shared world. The on on the right is, obviously, just the background artwork. That is what I believe a Thuroi looks like. Now, that doesn’t mean others won’t or shouldn’t have a different notion. It also doesn’t mean that you won’t read about Thuros that have a different look to them. The one constant will be the stone frame. What’s inside may vary, but I can tell you this. The ones I write about will look very much like this… although I reserve the right to switch things up if there’s a good reason to do so in the story. Story drives all. 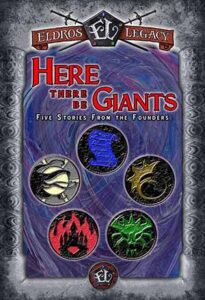 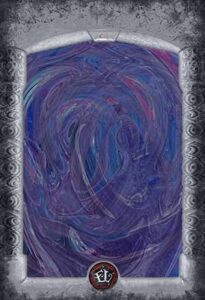 So, that’s it, your first taste of how the creative process works between the creative minds of the five Founders as well as the creatives that we rely upon. Everyone has done a great job, but we’ll leave it up to you do decide if we’ve satisfied your appetite for great stories and great artwork to go with it.

As always, thanks for your time, and if you read one of our novels and liked it, we can only ask that you leave us a review. Reviews are the best way to say thank you to any author (short of a bottle of scotch, IMO).