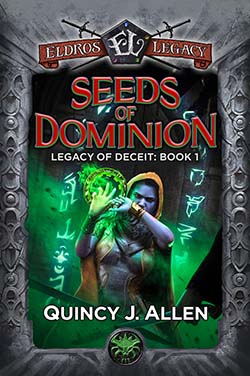 Unholy evil lurks in the shadow of a magical kingdom.

When a duke and his family are butchered in their sleep, a beleaguered king commands his brother Rellen to uncover not only who committed the heinous murders but why. Was it sedition? Political assassination? Or is it the gruesome machinations of a blood-hungry demon goddess and her cult?

Like fighting a hydra, every riddle Rellen solves exposes two more. The investigation quickly mutates into something far more sinister. As ancient artifacts, secret organizations, and hidden mysteries creep in at every turn, he sinks deeper and deeper into a foreboding conspiracy that threatens everything he knows.

Always one step behind, Rellen desperately chases one clue after another. To his growing horror, he realizes the duke’s murder was only the latest piece of a far-reaching legacy of deceit spanning centuries—perhaps even millennia—and the entire kingdom has been taken in by lies.

Once exposed, the terrible truth will be far more than anyone bargained for.

Seeds of Dominion is the first release from the sweeping saga of Eldros Legacy, the epic fantasy universe.