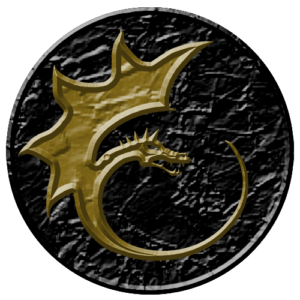 This is the imperial survey of the lands of Drakanon. It has taken six years to complete. Individual reports for each of the major political entities are available in the Imperial Archives. In addition to the kingdoms, expeditions were sent to survey each of the major races on the continent. All told, eighteen expeditions and twelve ships were involved in compiling this report. Regrettably, we have lost one expedition, the initial group to travel to Chacoton, as well as severe injury, despite the High King’s banner, to the second group to travel to that kingdom. Recommendations are in the pertinent section.

The traditional guardians of the north, they were hardest hit by the incursion of the Demon and the twisted horde. While there have been seven years of peace, there are pockets of strange creatures along the mountains that border the lands of Ehota and Eshita. The hereditary monarchy is well regarded by the people. The people are hardy, and the average house is well-fortified against incursion. Their primary production is in wool from goat and sheep. The expedition returned with several casks of mead that have been turned over to the steward and added to the cellar.

The horse people of the Ehota were approached during the clan gathering to the south for the summer months. They maintain clan farms and orchards around Lake Ehota and along the river. Several towns with permanent structures are also located along the river. We were unable to discern if the residents were permanent or if they rotated through. The expedition was not able to follow the Ehota as they dispersed.

The leadership of the clans is decided, we were told, by a challenge which invokes a series of contests in horsemanship, archery, and of all things, curing a horse hide. Their primary production is in riding-horses and ivory from an enormous creature the expedition was not able to find. They suspect the creatures are held in the far north.

The population of the Braizolux reside along the two rivers on the far sides of the kingdom. The monarchy maintains separate seats in established east and west capitals. This forces a semi-annual migration of the nobles from one capital to the other. Their chief production is in beef and cheeses. In fact, on the equinox of each season, there is a great cheese competition that is attended and judged by the Elves.

The expedition brought back several wheels of cheese from the winners.

The kingdom of Poseria is a democratic monarchy. Their ruling structure is such that a Council of Barons meets and elects one of their members, usually for life. Just as the king is elected, they can be voted out, too, in cases of serious malfeasance. Their lands are strangely warm for how far north they are. Consequently, they are able to produce an incredible variety of fruits and vegetables as well as an impressive amount of wine. The expedition sent several casks of wine by ship and sent reports of amazing culinary dishes designed to complement the wines. The survey team elected to remain in Poseria.

Nestled between Poseria and Grules, the expedition found a weak heredity monarchy focused entirely on providing goods to both kingdoms. They have no standing army to speak of and rely on peasant militias to put down bandits or the occasional dragon. The expedition traveled to the Death of Gods. One volunteer entered the region just past the markers. He had tied a rope around his chest and made it almost a hundred yards before he collapsed. They pulled him clear and he recovered with no adverse effects. While Traeloanid is bordered by two major rivers, they do not control a sea port.

Grules is a country divided by region. The expedition found the costal culture to be fun-loving and based around fishing. The sheer diversity in sea creatures they are able to catch is staggering. The expedition employed a Magus to freeze some creatures for the trek to the capital along with spices and instructions on how to prepare them.

The interior’s culture is more staid and conservative, and focuses on raising cattle and bison. They produce exquisite clothing from the cow and bison hides and woven flax. Trade between the interior and the coast can sometimes get intense, sparking minor conflicts. While the expedition was there, the king had to suppress one such conflict. The solution was unique: they forced the children of the leaders to live with the other’s family for a period of three years.

The people of Ikriledian have closely molded their culture after the capital. The visit from the Lightbringer during the unification had a significant impact on this culture. They have a healthy variety of industry, including significant metalworks run by a principality of Delvers who participate in court and are pervasive throughout the land. Their innovations with armor and weapons could benefit other regions.

The King of Ikriledian has taken it as the Lightbringer’s Mission to protect the city states of the Nid. They have prosperous relations with Reosha, Grules, and Shaekateron. However, they seem to be on the verge of open conflict with Chacoton.

The Hegemony of Shaekateron is an organization made up of a council of cities allied for trade and mutual defense. They grow grains, and export raw grains, various kinds of flour, and specialty pastries through the use of Magi who keep shipments fresh. They have several excellent brewers and leverage the variety of grains with hops to create deliciously flavored beer and festivals are held in each of the cities. The expedition spent the better part of four years cataloging the different beer varieties. Sadly, none of the kegs of beer sent survived the trip.

The Kingdom of Reosha has maintained a single ruling line since before the Lightbringer’s time. They have a well-established feudal hierarchy down to the city level.

Their primary product is in cured meats. They raise a variety of cattle, pigs, and chickens, and there is extensive fishing available in the channel between their coast and the Nids, the segmented island city states. The marshes of the river delta provide a natural location to harvest salts and the climate is perfect for growing spices. While nobles do fight one another, open conflict is limited by kingdom rules to 20 people on a side and no missile weapons. Professional mercenary companies frequently hire themselves out as intermediaries to settle disputes.

The Federation of Voutia is a matriarchy with a hereditary queen that keeps the dukes in line. This kingdom borders seven other kingdoms and has never been conquered. Because of the land’s precious metals and their relationship with the Delver clans, as well as tight political agreements with the neighboring kingdoms, threat from one area is met with resistance from the others. The line of queens in Voutia has married off their daughters so strategically that neighboring nobles are reluctant to get into conflict with relatives. The expedition spent the majority of their time in the region mapping ancestry.

The Empire of Drounid has a hereditary emperor. The land is divided into principalities but the princes aren’t necessarily related to the emperor by blood. The title of emperor passes to the prince the emperor chooses, which doesn’t always mean the eldest son of the emperor. The empire is the natural home of the Wlewoi, the feline race that makes up the bulk of the Drounid Royal Guard.

The primary production of Drounid is in fine cloths. The weavers of Drounid have mastered cotton, flax, silk and spider silk. Their dyes and textiles are admired in all kingdoms of Drakanon. The expedition returned with several bolts of violet cloth for the King.

Of all of the lands in Drakanon, this one by far has the largest population of dragons. The kingdom has an annual bounty on dragons that draws in hunters from all over the continent. The expedition monitored several of the so-called dragonslayers and witnessed all but one of them get eaten by their quarry. The expedition leader noted that the number of cattle lost to dragons dropped suspiciously when the bounty on dragons came to be. They also noted that they didn’t believe it was from killing the dragons so much as finding them an alternate food source.

Chatera has possession of the islands of Titon and Eaton in title, however, they are mostly autonomous and each possesses a notable school of magic that lies outside the purview of the Readers.

The Kingdom of Stuitor is pretty straight forward, simple hereditary king supported by a council of counts from each of the regions or counties, they control. They are renowned for ship building and lumber. Their western shores possess some of the largest growing trees on the continent. The Elves provide tree-wardens who assist in the maintenance of the lumber. A clan of Delvers resides in the mountain range running down the middle of the kingdom like a spine and provides advice and assistance in the harvesting and processing of lumber. Remarkably, with all of the lumber they have access to, the expedition found that almost all of the houses and buildings were made entirely of stone. The expedition speculated this was due to the influence and expertise of the Delvers.

The Holy Kingdom of Brouhan is dedicated to the Goddess Enki. Festivals, buildings, and music are all dedicated to Enki. The people are friendly and open to visitors of all kinds.

However, the expedition found a subculture within Brouhan that was almost atheist in composition with hostility less directed against Enki—they found most respected the Goddess—but more as a counter-culture against the religious fanaticism. The nobles turn a blind eye as long as tithing to the Goddess is not impacted.

The products of Brouhan stems from cultivated pearls of every color. Some were shown to have magical properties, especially those from the northeast part of the islands where the old capital fell into the ocean. The expedition found tales and lore on the Shagara but were not able to locate them.

The product of Eshita is fine metalwork due to the Delvers in the mountains that encompass two-thirds of the borders of the kingdoms, as well as in furniture made with the woods that come north out of Stuitor.

We lost one expedition to this kingdom and almost lost a second. If it weren’t for the intervention of a Magus and a group of Wlewoi, the second expedition would have been wiped out. The representatives of the king were hostile to the expedition, even with evidence of the high king’s banner.

This kingdom has disobeyed the high king, including the call seven years ago for the campaign against the Demon, and has been directly and indirectly attacking the city-state islands of the Nids. It is the recommendation of the Imperial Survey as well as the surviving expedition leader that a coalition of Drakanon forces be dispatched to bring this kingdom to heel. The expedition to Ikriledian indicated their king would happily lead the effort.

In the year of the Light being 720