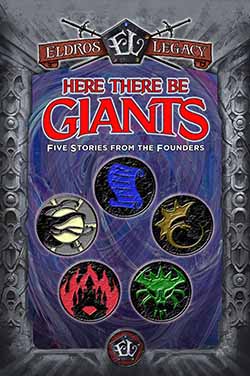 The giants are coming!

Embark on an unforgettable journey through a broken world: the Eldros Legacy.

Two thousand years ago, the five continents were cut off from each other after a cataclysmic war between the godlike Giants and a handful of scrappy mortal races…a war the mortals narrowly won.

Now, two millennia later, the long-vanished Giants conspire again; they move in the shadows, plotting to take back what is theirs. Stopping them will take a reawakening of long-lost magics and an unprecedented reunification.

It will take heroes.

Khyven the Unkillable may be first novel, but the story begins with Here There Be Giants, the anthology of pilot stories from the founders of Eldros Legacy.

Heroes, and a war that will remake the world.

Marie Whittaker Information about the author you selected