Rob is the publisher of New Mythology Press (https://chriskennedypublishing.com/new-mythology-press/), a founder in the Eldros Legacy fantasy setting, a reformed medieval academic, and a retired soda jerk.

His parents discovered books kept Rob quiet. Without them, it’s unlikely all three would have survived.

Quincy J. Allen is a National Best Selling cross-genre author with a growing list of novels and short story publications to his credit. His novel work includes action thriller, steampunk fantasy, military science fiction, military fantasy, epic fantasy, and even a post-apocalyptic media tie-in, all of which have been received to critical acclaim.

Going in several directions at once, he is actively engaged in new novels in five different universes, including two of his own. He is one of five Founders of The Eldros Legacy IP and will be devoting a good portion of each writing year to that project. Working from his home in Charlotte, North Carolina, he continues striving toward creating great new fiction to his growing list of fans.

Mark Stallings is an Amazon Best Selling author living in Colorado Springs, Colorado since the early 80’s. He is a member of Pikes Peak Writers, speaks at International conferences on Technology topics, is a writer of Wuxia, Fantasy, Thrillers and Military Sci Fi.  Mark is a competitive shooter, avid martial artist, drinker of craft beer, and motorcycle enthusiast.  He became an Amazon Bestselling author with his contribution to the Military Sci-Fi anthology in the 4Horsemen Universe Set The Terms released through Chris Kennedy Publishing Spring of 2020.  Mark released the first book in the Silver Coin Saga – The Elements through Shadow Alley Press summer of 2020.  He continues to sling the ink with further stories in the Silver Coin Saga, The Eldros Legacy, and the 4Horsemen Universes.

Marie Whittaker enjoys teaching about publishing, writing craft, and project management for writers. She works as Associate Publisher at WordFire Press and Director of Superstars Writing Seminars. Marie is an award-winning essayist and author of horror, fantasy, children’s books and mysteries. She is the creator of The Adventures of Lola Hopscotch, which is a children’s book series concentrating on anti-bullying. Her short stories appear in numerous anthologies and publications, including Weird Tales. Marie is a founder of Eldros Legacy and creates epic fantasy for that universe rather than sleeping most nights. She can be found in Manitou Springs, Colorado, hiking and yelling “Eldros forever!” from the mountain tops. Get free short fiction and find out more about her at www.mariewhittaker.com. 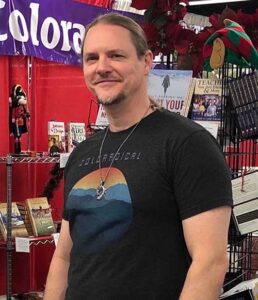 Todd Fahnestock is a writer of fantasy for all ages and winner of the New York Public Library’s Books for the Teen Age Award. Threadweavers and The Whisper Prince Trilogy are two of his bestselling epic fantasy series. He is a 2021 finalist for the Colorado Book Award and winner of the Colorado Authors League Award for Writing Excellence for Tower of the Four: The Champions Academy. His passions are fantasy and his quirky, fun-loving family. When he’s not writing, he teaches Taekwondo, swaps middle grade humor with his son, plays Ticket to Ride with his wife, plots creative stories with his daughter, and plays vigorously with Galahad the Weimaraner. Visit Todd at toddfahnestock.com.